Make Your Own Electricity 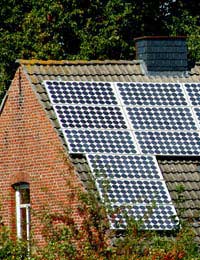 Making your own energy can be more environmentally friendly and sustainable than buying from energy companies. It can also be cheaper. You can create energy from renewable sources such as the sun, wind and water. Creating energy for your own home is known as “micro-generation”.

Renewable energy creates low or no carbon when it’s generated, unlike fossil fuels. As well as often being cheaper to create yourself, you can also sell excess energy back to the national grid. Despite these money-saving possibilities, it’s also important to bear in mind that home renewable energy systems can be quite expensive to set up but more than pay for themselves over time.

The type of micro-generation that suits you will depend on a number of factors such as your energy needs, your home and the weather. For example, you’ll need to live somewhere sufficiently windy for a wind turbine to generate enough energy. Similarly, you will need to have enough surface area facing south for solar panels to be possible. In some cases a combination of technologies can be the best solution.

Energy can be generated from the sun using photovoltaic systems or solar panels. Panels can be added to roofs or buildings as long as an area faces 90 degrees south. If there is too much shade or the light is blocked by trees, not enough energy will be generated.

To buy and install a system which generates up to half a domestic property’s electricity requirements will cost around £12,500.

Wind turbines use turning blades to generate electricity. Domestic wind power systems are particularly well suited to houses situated in remote areas. This is an added bonus because traditional electricity supplies can often be harder to access in these areas.

Wind turbines are best mounted on a mast or tower where wind speeds are faster. There should be no major obstructions that will break the wind, such as trees or large buildings. To check whether your property is suitable for wind energy generation, it’s usually advisable to do a long-term test on wind speeds (up to one year).

A wind energy system to suit an average house is likely to cost around £15,000.

Energy can be harnessed from water when it is used to power a turbine. Power can be generated even from a small stream but the water source will need to be fairly close to where you live. The amount of energy that you can harness from water will be affected by how fast the water is flowing and how far it falls. You may need planning permission to install a turbine.

More Ways to Generate Your Own Electricity

Other ways to generate electricity include:
Next Page

Ten 'Make Your Own' Uses for Lemons

Make Your Own Humane Mouse Repellent

Make Your Own Brass and Copper Cleaner

How to Make A Garden Wildlife Pond